Our list of successful Ribble Life Together projects continues to grow with another successful fish pass project for summer 2017. The Bluebell Wood Weir, a two-step stone and concrete weir on the River Calder, is located just upstream of Towneley Park.

The weir site is part of Towneley Farm, with an open field on one side and a woodland on the other.  The woodland is called Wet Marl Wood, but is known locally as Bluebell Wood.  According to the farmer, the weir was installed in the 1960’s to oxygenate the water which was heavily impacted by mine drainage.  This problem is now much less severe and the river is now in generally good health. This means the weir is no longer necessary for oxygenation.  The weir was a barrier to fish migration and is currently forming the upper limit of fish migration on the River Calder. All of the downstream barriers have already been made passable, so it was really important for us to tackle this weir. 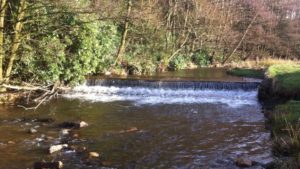 After an options appraisal, the preferred solution at this weir was a partial removal of the central section, allowing the restoration of a more natural river channel through the weir.  On this site there are no nearby buildings, amenities or underground services, which makes a removal much more feasible.  In addition to fish passage, the river’s geomorphology will also benefit as sediment transport will be improved as a result of the weir’s removal.

Bag’s of Help from Tesco

In addition to the support from national lottery players through the Heritage Lottery Fund, this project received funding from the Tesco Bags of Help scheme, where money raised from the 5p bag charge is being used to fund thousands of local projects in communities right across the UK. Tesco teamed up with Groundwork to launch its Bags of Help initiative across England and Wales.

The scheme has seen three community groups and projects in each area awarded grants of £12,000, £10,000 and £8,000 – all raised from the 5p bag charge. The public voted in store to decide which local groups should receive the £12,000, £10,000 and £8,000 awards, 2,421 organisations from Tesco’s 400 regions up and down the UK will receive a share of the Bags of Help fund. Our vote took place in the Burnley Tesco Store, so we’re very grateful for the support from the local people of Burnley.