We’re pleased to announce the successsful completion of another fish pass project! The project was completed in only one day and improved 9.4km of river along Gayle Beck, high in the Upper Ribble area of the catchment.

Selside Weir was a loose-stone weir constructed with un-set stone (mostly cobbles and boulders) and topped with stone slabs.  Although not as big as some of our other fish pass projects, the weir still created a barrier to migrating fish, including Atlantic salmon and resident brown trout.  It also contributed to geomorphological issues in Gayle Beck as it prevented the natural movement of gravel downstream.

Little is known about the history and origin of the weir. We’ve not been able to find out what the weir was used for in the past, even after completing an archaeological survey of the site. Assessment of the National Library of Scotland Map Archives found that the ‘weir’ was part of the old walled boundary between Selside Common and what is now Lower Birkwith Farm. So it may be that the weir was simply a boundary marker. 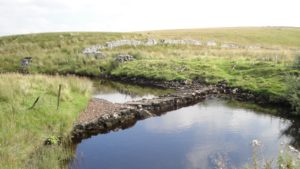 Why have we removed part of the weir?

For each fish pass site, we consider Our assessment of the weir led scheme designer and Catchment Science Co-ordinator, Mike Forty, to recommend a partial removal of the central section of the weir:

“By partially removing the central section of the weir, we were able to create a suitable channel for fish to swim past the weir. This also protected the river banks from erosion and limited the overall impact on the geomorphology of the river channel.”

The term river morphology or geomorphology describe the shape, direction and behaviour of river channels and how they change over time.