Art is an excellent way to engage with people in a creative, alternative way and provides new opportunities for communities and families to enjoy their local rivers and the outdoors.

Thanks to Ribble Life Together project Ribble Rivers Trust have created five pieces of art, as well as helping fund other art activities, such as sketching workshops and art activities with school children. 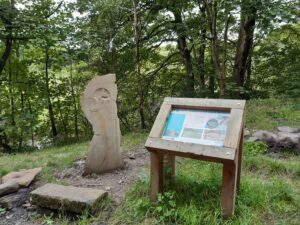 Oakenshaw sculpture and interpretation board

To celebrate Oakenshaw fish pass near Clayton le Moors, a stone kingfisher carving was installed at the viewing point. The sculpture was created by award-winning Lancashire-based stonemason Alan Rhodes. The kingfisher is depicted diving for prey. Kingfishers are regularly seen hunting along this stretch of the River Hyndburn. 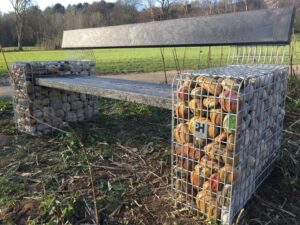 In March 2020, a gabion basket style bench was installed in Witton Park, Blackburn by Ribble Rivers Trust as part of Ribble Life Together. The bench was designed and fabricated by Pendle-based designer Philippe Handford. The pebbles within the gabion basket arms were decorated with river wildlife by St Francis Cubs. Situated on the banks of the River Darwen, the bench provides a peaceful spot to sit and enjoy the river. 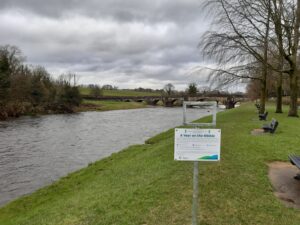 Static photography stand located on the bank of the River Ribble.

A Year on the Ribble

In April 2020, A Year on the Ribble began. Four static photography stands were installed along the River Ribble to encourage members of the public to take photographs of the same view throughout the year. The stands are located at Knight Stainforth Hall near Settle, Edisford in Clitheroe, Avenham Park in Preston and Lytham Green. The stands will be in situ for a year, enabling a snapshot of the same locations as they change through the year. The photos which are shared with us will be compiled to create a celebration of the Ribble throughout the seasons. 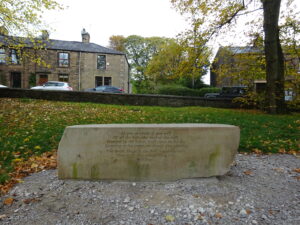 A stone bench on a grassed common, overlooking the fish pass installed on Sabden Brook.

After the completion of Sabden fish pass, a stone bench was installed on the grassed common area overlooking the fish pass. The stone was engraved with a poem written by a Sabden resident about the importance of Sabden Brook to the heritage of the village. The bench has become a popular place for villagers to enjoy the brook and catch up with neighbours. 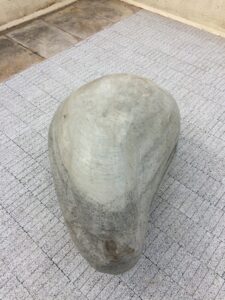 The restored mussel tank in Lytham features a variety of installations celebrating the history of fishing in the estuary. Ribble Rivers Trust supported the installation of a large stone mussel sculpture, created by Martyn Bednarczuk. The three mussel tanks situated along Lytham Green were historically used for cleaning mussels harvested in the Ribble estuary.