West Bradford Weir was a concrete clad stone structure which lies in the heart of the village of West Bradford, where it runs through a wall lined channel. On the left-hand side of the weir there are gardens and houses running down towards the brook, and the main road runs along the right side.

Despite these constraints and the village location there is some excellent habitat upstream of the weir, and the weir itself is close to the confluence with the main River Ribble, making it a valuable spawning stream. The weir was only small at 0.5 metres high, but the lower step made it almost impossible for fish to make the jump.

Because of the location of the weir and the surrounding houses and other infrastructure it was decided that a rock ramp built over the existing weir would be the safest option and would cause the least amount of disruption to the village. 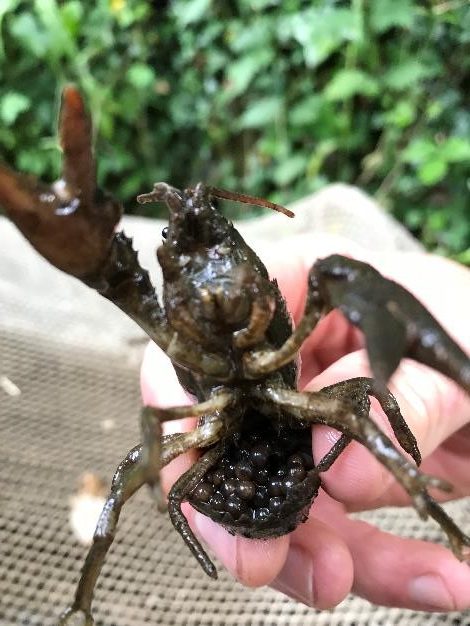 However, during the pre-construction fish rescue a white clawed crayfish was discovered in the brook. These endangered species have not previously been known to live in the brook, and the crayfish found was a female carrying hundreds of eggs. White clawed crayfish are a relatively rare sight in the Ribble catchment, and the overall European population has declined by 50-80% in the last 10 years.

All crayfish in the area around the planned fish passage site were carefully caught and relocated upstream whilst the work was carried out. By locating the crayfish to an upstream location, we can ensure that the crayfish is able to easily migrate back down stream when the work was completed. This only caused a minor delay and, in this case, it was a delay caused by a welcome discovery!