What is a non-native invasive species?

Not all non-native species are harmful. It is only the ones that have a negative effect on native British species, or on health, infrastructure, or the economy. These are classed as non-native invasive species.

What is Himalayan Balsam? 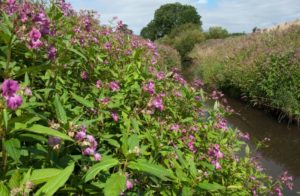 Himalayan Balsam on a river bank.

Himalayan Balsam (Impatiens glandulifera) is an example of a non-native invasive plant. The plant was first introduced to Britain from Kashmir in 1839 and was displayed and cultivated in Kew Gardens. By 1855, the plant that is naturally native to Himalayas was growing in Middlesex and  Hertfordshire.

The plant has now spread across most of Britain, including the Channel Islands. It is also prevalent across northern and eastern Europe. In England and Wales, it is listed under Schedule  9 of the Wildlife and Countryside Act and therefore cannot be planted, cultivated, or introduced into the wild.

In the UK Himalayan Balsam is most commonly found along riverbanks, streams and canals, around ponds and lakes, or in shaded, damp woodlands and meadows. Here the plants grow to heights of up to 2.5 meters from seed to plant, and once matured the seeds are spread with an explosion of the seed holding fruit capsule. This is called explosive dehiscence and each plant can release up to 800 seeds up to 7 meters away. These seeds often land in the water and are carried downstream where they become lodged in banksides and colonise the area. The seeds can also be passed on by humans, on shoes, fishing equipment, and canoes. 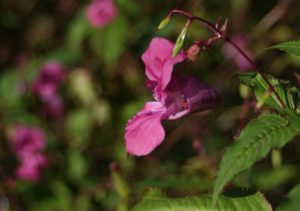 The flower of a Himalayan Balsam.

As Himalayan balsam spreads, grows, and matures so rapidly  it is very hard to control. Once the plant begins to grow it quickly outcompetes other plants for resources, especially sunlight. Additionally, the balsam produces high yields of nectar and has a long flowering season, and so attracts an abundance of pollinating insects, which may be reducing the pollination rates of other native plants. Himalayan balsam also has a very shallow root system which,  when the Himalayan balsam dies back for the winter, leaves river banks bare and at a greater risk of erosion.

How can we stop the spread? 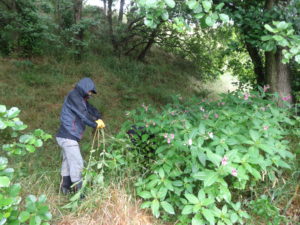 In order to deal with the balsam control needs  to be taken before the plant flowers. The easiest way to get rid of Himalayan balsam is to pull the plants out of the ground (which is easy due to the very shallow roots) before snapping the plant at the base. They can then either be collected and disposed of or, if the balsam is being pulled on small scale, simply left to rot. Larger patches of balsam can also be strimmed.

Ribble Rivers Trust carry out balsam pulling sessions regularly throughout the spring and early summer. Using mapping and GIS software we can prioritise which areas should be tackled first. In order for our work to be effective in eradicating balsam we need to focus on upstream tributaries first, as if we start on the main river it will simply become colonised again by seeds from plants upstream.

You can volunteer with us and lend a hand with our balsam pulls. Visit our website to find out more.

A before and after picture of an area cleared of Himalayan Balsam.

For more information on Himalayan balsam and other non-native invasive species please visit the GB non-native species secretariat website and .