Mill Lane Weir was a stepped stone and concrete weir 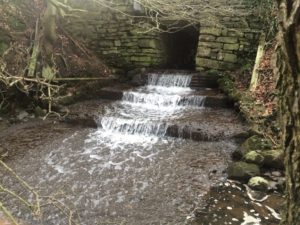 on an unnamed tributary of the River Loud near Chipping.  It was at the end of a 50m long open culvert, situated next to a former Lancashire County Council Highways Depot. This was previously the site of a mill called ‘Little Mill’ which made clay land drain pipes.  Upstream of the Mill was an intricate system of weirs, mill races, sluices and mill lodges to supply the mill.  The mill lodges are now filled in, however the smaller lodge remnants (immediately adjacent to the mill site), are still visible.

Although the mill has now been demolished, some of the structures remain, such as the culvert and weir.  The weir itself had four steps and a total height of just over 1m, posing a barrier to fish migration. This also contributed to the poor ecological status of the River Loud catchment

A notched baffle fish pass, with a loose fill rock ramp downstream of the lowest step was chosen as the most effective design for this site. The notched baffles created small chutes and pools up the steps, whilst the rock ramp reduces the height difference between the bottom of the weir and the first step. The rock ramp also protects the riverbed immediately below the fish pass from erosion.