The Trust are delighted to confirm that the first five wetlands that were planned as part of Ribble Life Together are now complete. Knotts Lane 1, Lower Agden, Cam End Common, and Slate Pits were all completed on schedule. Additionally one wetland, Knotts 2, has been completed ahead of schedule, having originally been planned for May 2018. 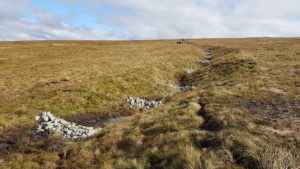 697-hectare designated common within the Cam Fell moor. The common is an upland blanket bog and heath that has historically been subject to drainage, or gripping, which has led to a decline in habitat quality. 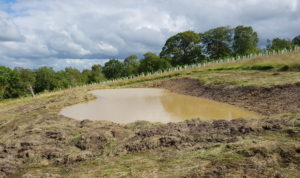 Knotts Lane 1 & 2- This site has already benefitted from a 4-hectare tree planting scheme across several of the fields than surround Bond Beck. This was designed to slow the flow of rainwater runoff and increase infiltration rates.

Four ponds have now been created within the woodland which provide valuable habitat for invertebrates and amphibians, as well as slowing the flow of water and improving water quality. Further to this brash bundles and bunds have been installed into ditches and flow pathways to slow the flow of rainwater runoff and retain sediments, which again will help to improve water quality. 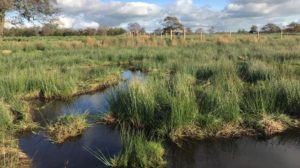 Lower Agden- Lower Agden Farm falls within the Skirden sub-catchment and is another location that has benefited from both woodland and wetland schemes. Both of these schemes will help  to slow the flow of rainwater,  reduce flood peaks, create and connect habitat, and reduce the amount of sediment entering Skirden’s waters.

The Skirden sub-catchment has benefited from a range of environmental improvement schemes over multiple sites. This is due to the fact that Skirden has been identified as an area with a significant potential for salmon and sea trout spawning, however the redds (egg nests) of these species are prone to being washed away in flood events. By reducing flood risk here it is hoped that the viability of these redds will be improved and the fish populations will increase in the area. 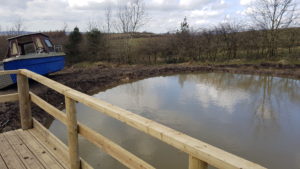 Slate Pits- Slate Pits is an upland hill farm close to the town of Accrington. The farm is on the moorland fringe and has several species rich meadows within it. However one field was made up of rush dominated wet ground which collected into a small stream.

This field was identified as having great potential to accommodate a new wetland and so with careful planning a totally new wetland has been created in line with the existing watercourse. This wetland will accommodate a range of upland wildlife, in particular breeding waders such as lapwing, redshank, and snipe.

The site’s wetlands will also help to reduce flood peaks and improve water quality. In addition the site will provide an educational resource for local school children who will visit the site thanks to the pathways and viewing platforms that have been included in the sites infrastructure.