The Ribble Life partnership began in 2011 as a pilot project to explore ways of increasing stakeholder engagement and involvement in delivering Water Framework Directive (WFD) objectives. As one of five national trials, it tested the Catchment Based Approach (CaBA), which is now DEFRA’s recognised approach for catchment management.  CaBA embeds collaborative working at a river catchment scale to deliver cross-cutting improvements to our water environments. Ribble Rivers Trust is the host organisation of the catchment partnership for the Ribble Catchment and the partnership operates under the name of Ribble Life. Ribble Life is arguably one of the UK’s most successful partnerships. 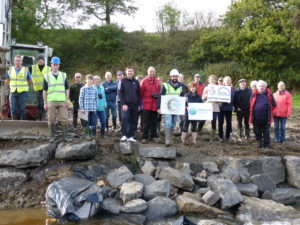 EFRA have set out key elements and principles for CaBA, namely: to create partnerships which will be representative of interest groups and stakeholders at a local catchment scale, who will develop a catchment action plan to aid in the delivery of WFD and wider objectives. These include (but are not limited to): Ecosystem Service provision, Habitats Directive, Biodiversity 2010, Flood Risk management and locally important plans and strategies. These commitments were underlined in 2018 with the publication of ‘A Green Future: Our 25 Year Plan to Improve the Environment’, commonly known as the 25 year Environment Plan.

Effective partnership working can deliver multiple benefits and have a greater impact on the environment than if organisations were operating alone. Since its inception, the Ribble Life Partnership has delivered several successful collaborative projects, building in scale and culminating in the development of a catchment scale project called Ribble Life Together, which began its delivery phase in April 2017. This programme included both physical river improvements and engaged with communities on a scale not attempted before. By the end of 2020, Ribble Life Together will have created 14 fish passes, 30 woodlands and 15 wetlands, improving and sustaining the river heritage and ecology, and will have engaged thousands of people who will have learned about the importance of rivers and been encouraged to take action and do something positive to help their local river. Early management outcomes of Ribble Life Together, have demonstrated an increased level of collaboration around water, where this delivers multiple objects.  This is shown through the development of new programmes if work such as Ribble Life for Water, Pendle WINNS and others. 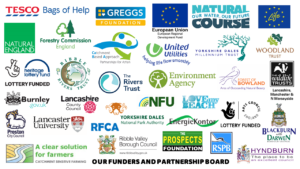 The Ribble Life Partnership have agreed the following vision:

“Through collaboration we will create a thriving land and water environment within the Ribble Catchment that will bring economic, health and social benefits for all”

The agreed goals to achieve the vision are to:

In order to identify which areas of the catchment needed our help the most our partnership collected huge amounts of data and evidence. By collating this data key locations have been identified as our targets for the coming years.

This data has also allowed us to formulate some specific goals which include: