There are over 1000 barriers to fish migration in the Ribble catchment. Most of these are weirs, built at some time over the past three centuries, and now largely redundant. Artificial barriers to migration break up the river habitat, fragmenting it into segments. This severely disrupts the lifecycle of migratory fish such as salmon and eels, and reduces the quantity of habitat available to them. Barriers to migration are known to negatively affect fish populations and are one of the main reasons for failing to achieve ‘good ecological status’.

So far this year we have completed six fish passes, making us well ahead of our planned schedule! 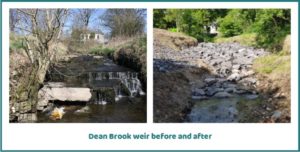 Dean Brook weir before and after.

Dean Brook weir’s state of disrepair was contributing to erosion on the brook and limiting fish migration. The weirs purpose is unknown and feasibility studies showed that removal could increase erosion and flood risk. Therefore, a rock ramp was created to increase accessibility for migratory fish without removing the structure. 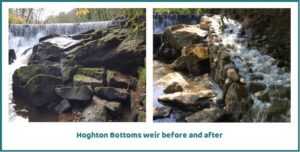 Houghton Bottoms weir before and after.

Hoghton Bottoms weir is one of many barriers on the River Darwen. This weir is important culturally as a well visited beauty spot, and historically having once provided water to local mills. In order to ensure that this weir retained its distinctive features a rock ramp fish pass was created up the left-hand side of the weir. 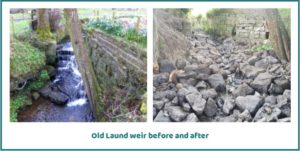 Old Laund weir before and after.

Old Laund Clough is a potentially valuable nursery stream. However, a 1.5m weir, thought to have been built for a local mill in the 1900s, was blocking fish migration. Removal wasn’t possible as the weir supports the upstream constructed channel, so a rock ramp was created, enabling fish migration and supporting the upstream channel. 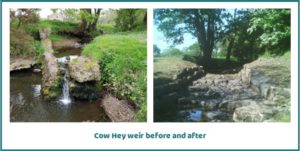 Cow Hey weir before and after.

Cow Hey weir lies on Cow Hey Brook, near its confluence with Bashall Brook. The weir originally provided water for a nearby mill, although there is little remaining evidence of the mill other than the remains of the leat. As the weir is not in use it was possible to totally remove it and replace it with a rock ramp which will limit erosion, return the brook to a more natural state, and encourage natural river processes. 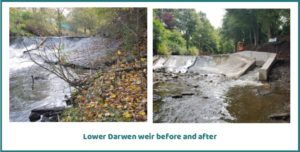 Lower Darwen weir before and after.

Lower Darwen weir dates back to the mid-1800s when it supported the local mills. Due to the weir’s proximity to businesses and homes, and the potential for issues caused by altering the rivers flow, a bypass channel was constructed around the left-hand side of the weir to enable fish passage and protect the existing weir structure. 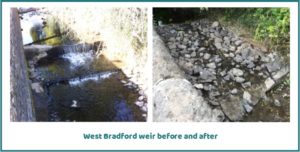 West Bradford weir before and after.

West Bradford Brook runs through West Bradford, with a weir located in a stone lined channel in the village centre. The weir is close to the main Ribble and the habitat above the weir is good potential spawning habitat. The weir is only 70cm high, but the lower step makes it impossible for fish to make the jump and so a rock ramp was created which will enable the fish to pass over the weir.