A sketch being done by one of the attendees of the workshop.

We are hosting a series of 6 sketching workshops with local artist, Pat Southern-Pearce. So far two workshops have taken place, Horton in Ribblesdale in October and Padiham in November. Attended by a mixture of experienced sketchers and novices, the workshops cater for all abilities. Situated at various locations on the Ribble Catchment, the workshops aim to encourage an appreciation of our local watercourses and a engage with a wider audience.

Horton in Ribblesdale – based at the village hall, the first workshop took place towards the top of the catchment in the shadow of Pen-y-ghent. With the weather being a little wild during the morning, initial tuition took place indoors. In the afternoon, most participants were able to get outside to sketch or at least take photographs to sketch from indoors. 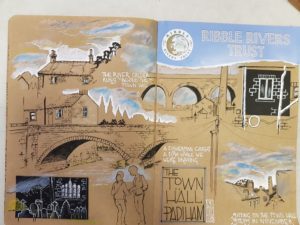 Padiham – located at the Town Hall, our second workshop featured the more urban setting of the River Calder. Dry weather allowed a couple of sessions sketching outdoors during the day. Participants were able to sketch right by the Calder, and the river features quite prominently in the finished.

Feedback so far has been overwhelmingly positive:
“Never sketched before! Enjoyed it so much.”
“Excellent day, enjoyable, interesting & informative.”
“Inspirational day. Learned lots of new things.”

The remaining 4 workshops take place in 2019 at the venues below and are proving very popular, so please get in touch if you would like more details. Email: admin@ribbletrust.com

All workshops are £10, 10am-4pm, with lunch included. Workshops include some tuition indoors from Pat with the opportunity to sketch outdoors by the river if the weather permits. 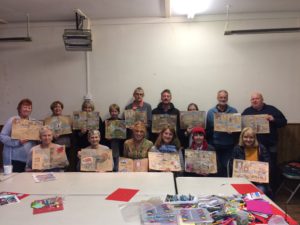 A group photograph of everyone who attended the sketching workshop.