Litter is an eyesore and can make the most beautiful of nature reserves seem uncared for and neglected. However, it’s effect on the environment is far more problematic.

Litter is harmful to both wildlife and the environment and isn’t just a threat to those who live in and around rivers. Rivers transport a large proportion of the litter they contain out to the seas, where it poses a threat to marine wildlife. 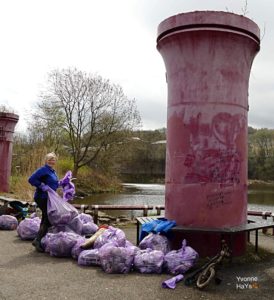 A volunteer stood next to multiple bags of rubbish following a litter pick.

In both rivers and seas invertebrates, fish, and birds are consuming this plastic, which is often mistaken for food. As plastics break down they become smaller and smaller, forming microbeads and microplastics, which are consumed by the organisms which form the basis of the food web. As the organisms themselves are consumed they enter the very food chain which we ourselves rely on for sustenance.

This isn’t the only issue facing wildlife. When certain types of plastic break down they release toxins which are polluting water and poisoning the organisms whic h have inadvertently consumed the plastics.

Furthermore wildlife, especially fish, birds and mammals, can easily become tangled or trapped in nets, bags, and empty containers. Recent research by Keep Britain Tidy has shown that as over 8% of littered bottles and almost 5% of littered cans contained the remains of small mammals such as shrews, voles, and mice. 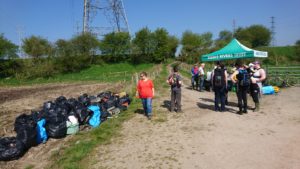 Removing litter wherever we can will help reduce the waste in our oceans and rivers. That’s why the Ribble Life Together partners and the Ribble Rivers Trust have already carried out a number of clean ups this year with our volunteers, with Victoria Park (Nelson), Ball Grove Park (Trawden), Moor Park (Preston), Long Preston, Penwortham, Platts Lodge (Accrington), Preston Marina, Woodnook Water (Accrington) and the Hyndburn Brook Greenway all benefiting so far.

Please always take your litter home and recycle where possible! 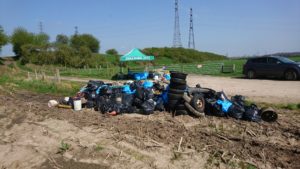 Multiple bags of rubbish and stacks of tires collected at a litter pick.