There’s been something fishy going on in local schools recently, thanks to the Ribble Rivers Trust.

Hundreds of schoolchildren have been hooked on Trout In The Classroom, part of the Trust’s Ribble Life Together project, supported by the National Lottery Heritage Fund. 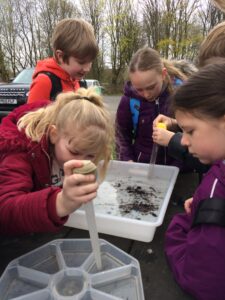 School children involved in Trout in the classroom.

Since December, Key Stage 2 pupils at Worsthorne, St Stephen’s CE, Springfield Community Primary  and Ightenhill Schools in Burnley; Balderstone School in Blackburn; Oswaldtwistle’s White Ash School,  and Stonyhurst St Mary’s Hall have been following the progress of trout from when they were delivered to their schools as eggs until their release into local rivers.

“At the age of 10 and 11, children are more receptive to environmental messages and take them home so the learning is extended to their families,” said education officer, Neil Ashworth who was a firefighter for 27 years before joining the Trust six years ago.

Neil delivers about 100 fish eggs to each school which also receives a tank, chiller and filter to keep the water clean.

He talks to the children about the project which involves learning about river habitats and food chains and then he leaves the eggs for them to watch develop over the weeks ahead.

Once the eggs hatch out, the trout start looking for food and the children are able to feed them.

“Trout can develop personalities,” said Neil.  “This year, Springfield School had a trout they named Tina who was a real bully and ate so much, including some of the other fish, that she nearly outgrew the tank!”

The children can get so attached to the fish that they talk to them, sing them songs and read them poems.

One year, at Stonyhurst, the school gave a blessing for the trout and toasted them with lemonade when they were released.

Unfortunately, owing to the Coronavirus outbreak which led to school closures, the children were unable to watch the trout being released recently but the process was filmed and videos will be sent to the schools.

It’s hoped that once the pandemic is over, the children can visit the river and participate in pop up labs to learn about sampling and water safety as they would have done under normal circumstances.

The Trout In The Classroom programme began several years ago and is growing in popularity thanks to its links with many subjects in the school curriculum including science, literacy, geography and art. 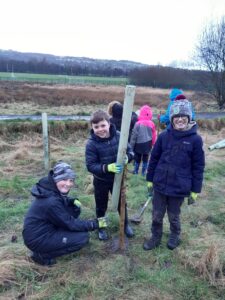 The activities have worked particularly well for autistic children attending Oswaldtwistle’s White Ash School where the programme was sponsored by the town’s Rotary Club.

The environmental aspect of the project has also inspired children in Burnley to take part in a littler pick in Towneley Park and change their attitude towards dropping litter there.

Now word about Trout In The Classroom is spreading from the Trust’s immediate area with schools from Lancaster and Bolton already booked in for the 2021 cycle.

Since the Ribble Rivers Trust began their river education programme, more than 7,000 pupils have participated and enjoyed sessions which are interactive, educational and fun.