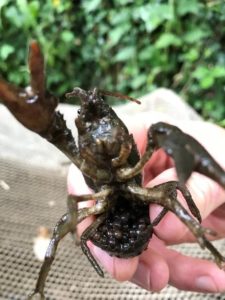 West Bradford Brook weir is one of the many weirs in the catchment that have been identified as potentially preventing successful fish migration and subsequent spawning. As such planned work was due to be carried out on the weir in June, however during the pre-work fish rescue that was carried out white clawed crayfish were discovered in the brook.

These endangered species have not previously been known to live in the brook, and the crayfish found was a female carrying hundreds of eggs. White clawed crayfish are a relatively rare sight in the Ribble catchment, and the overall European population has declined by 50-80% in the last 10 years.

All crayfish in the area around the planned fish passage site will now be carefully caught and relocated to a suitable upstream habitat so that they are not harmed during work, which will recommence on Tuesday 28th August. 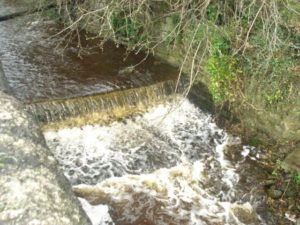 The stepped weir at West Bradford.

Why are we making a fish passage?

West Bradford Brook weir is located in the village of West Bradford, near Clitheroe. The stone stepped weir is clad in concrete and runs through a wall-lined channel. Although the weir is relatively small at approximately 0.7 meters high the lower step makes it almost impossible for fish to jump the upper step.

The brook upstream of the weir is a potentially valuable spawning habitat, and the weir itself is very close to the brooks confluence with the Ribble. By making the weir passable it is hoped migrating fish will be able to reach this promising spawning site.

Removal is out of the question at this due to the close proximity of the road, houses and gardens. A fish passage options appraisal has identified that an embedded rock ramp is the most suitable solution at this location, providing an efficient fish pass with no increase in flood or erosion risk.

To find out more about white clawed crayfish please visit the Buglife website.